Yes, This is my craft room - I would like to say that I was in full creative flow when this was taken, but no, this is how I walked away and left it yesterday! 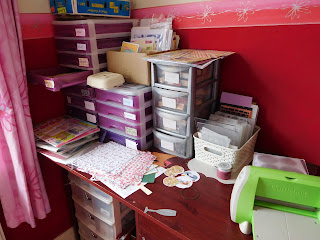 After years of having to craft at the dining room table, it is so nice not to have to pack everything away each time. I am lucky to have room for 2 desks and loads of storage boxes and trays. However, I cannot remember where I have put my pineapple die and stamp set - shall I waste time sorting through everything or hope it just turns up? 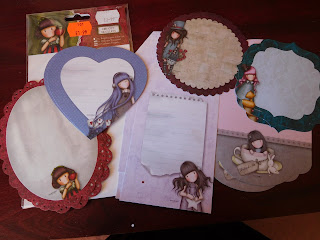 I picked up this packet of 14 Gorguss die cut notelets to use as card toppers. They were only reduced by £1 to £1.99 - but I thought that was still a bargain. 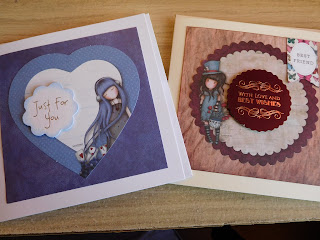 And these are the first 2 cards I have made with them!
Posted by Alizabethy at 19:53 7 comments:

Anyone else remember that classic record by Jasper Carrot called 'Funky Moped' ? I never knew it was produced by Jeff Lynne of ELO fame! 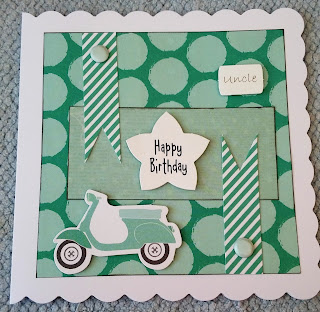 Well, this funky retro moped, paper and embellishments all came from the Craftwork Cards box.
Posted by Alizabethy at 09:18 8 comments: 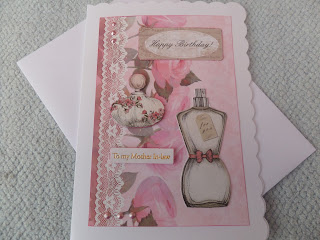 I'm still working my way through the Craftwork Cards sale box that I bought back in April. These cards are made with the perfume bottle toppers from their Vintage Ephemera range. 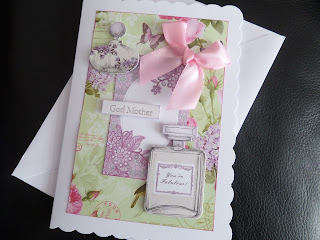 Despite making these cards here  plus these ones too,  there  are still loads of bits left!
Posted by Alizabethy at 06:21 7 comments:

The Battle of The Somme - My Scrapbook 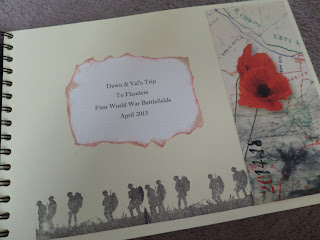 Last year my Mother and I went on a coach trip organised by Galloway Travel to visit the World War One battlefields and cemeteries in Flanders - and I made a scrapbook to record our visit. 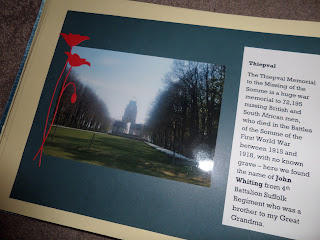 Thiepval, which was on the news last night, is a stunning memorial to those with no known grave, including my great great uncle Arthur Whiting. 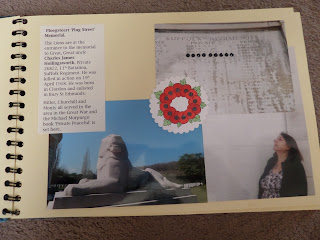 There are so many cemeteries scattered around the area. This is Ploegsteert memorial, where another great great uncle Charles Hollingsworth is listed. He and his brother Fred died on the same day, in the same battle - neither body was ever found. Hitler, Churchill and Monty all fought in this area in WW1. 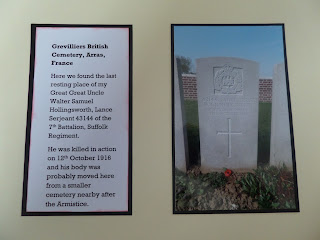 The main reason we went on this trip was to find the grave of Charles brother Walter who died in 1916 - the only one of my relatives who has known burial spot. This was at a small site in Grevilliers 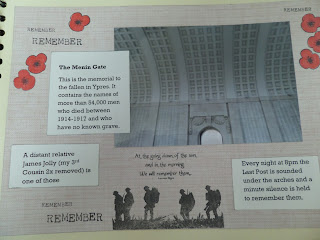 We stayed at Ypres where Menin Gate is, every evening a small ceremony is held to remember the dead - very moving. James Jolly, another distant relative,  is named on the gate. 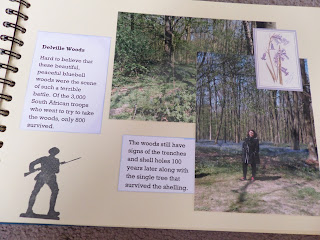 One of my strongest memories was of Delville Woods where thousands died, but is now a tranquil wood full of bluebells but pockmarked by overgrown trenches and shell holes. 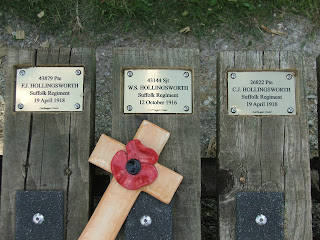 Another memorable place was Lochnagar Crater - created at the beginning of the Battle of the Somme. there are small brass plaques along the walkway around the rim and we have paid for the 3 Hollingsworth brothers to have their names remembered together in the same place. 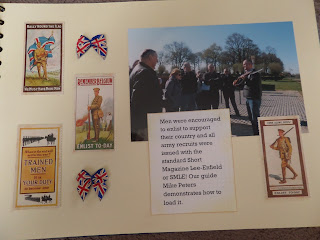 Sorry this is such a long post, but I wanted to make my own small tribute to all of those involved in the Battle of the Somme. I can highly recommend taking a guided tour of the area. We learnt so much from our knowledgeble guide Mike Peters. He really bought the battles to life for us. There is a bit more about the trip on another blog of mine here
Posted by Alizabethy at 08:24 10 comments: